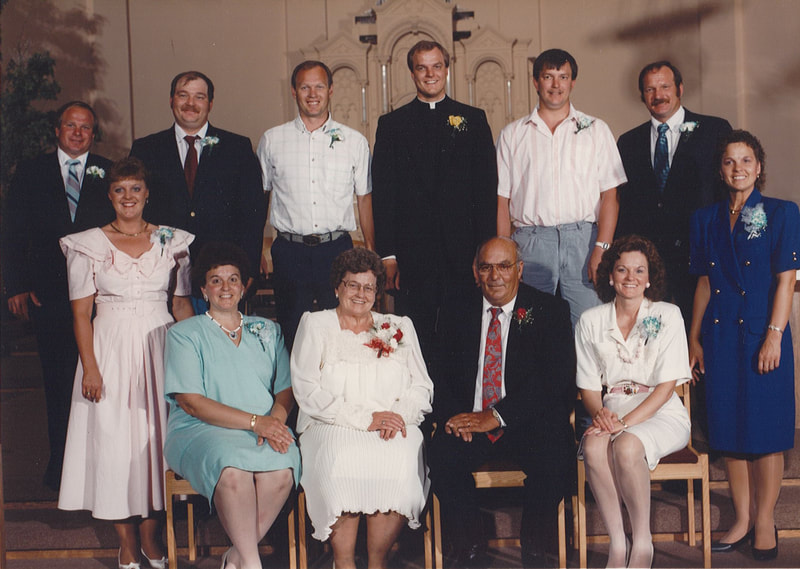 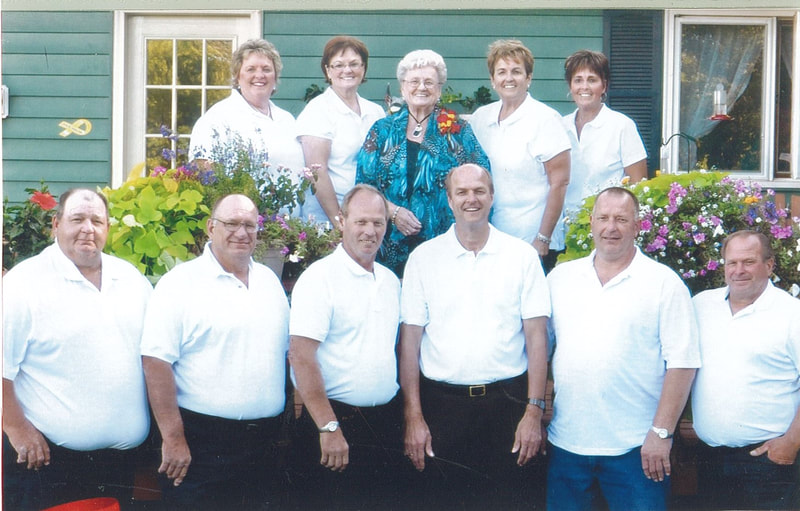 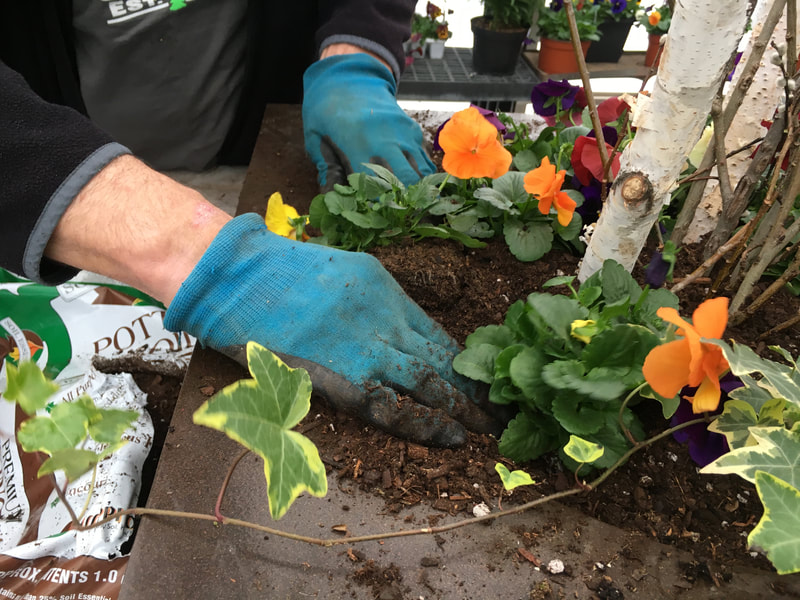 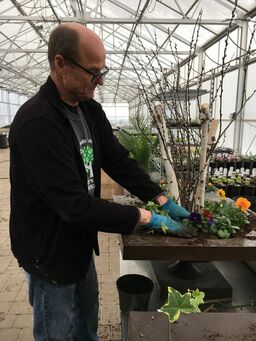 Fr. Steve Verhelst, pastor at St. Mary’s Catholic Church in Willmar, grew up on a small dairy farm outside Canby. Animals, crops, the garden, school and church occupied daily life but it was a singular flower cleaving to a rock wall in Wyoming that pointed to a spiritual awakening and a pastime of cultivating potted plants. Here is Fr. Steve’s story, as told to Donna and Rand Middleton. A version of this story was published in the West Central Tribune Spring Home and Garden section on April 25, 2019.

As the youngest of 10, I was the most spoiled, and my mother’s favorite. All my siblings would agree. Our parents, Marian and Daniel, had those 10 kids in 11 years, and there are no twins.

Growing up on the farm we had lots of animals: chickens, dairy cows, beef cattle and hogs. Living along U.S. 75, we had stray dogs and cats from litters, people would just drop them off along the highway. We weren’t going to let the animals suffer. We always had plenty of milk for kittens and spare food for the dogs; our farm became their home.

For a farm family to survive, everyone had to do their share. At the age of 7 or 8, you’d begin taking care of the chickens. You’d get them fed and help pick eggs. Mom provided eggs for the creamery in town as well as countless people who came to the house. This literally became the grocery money for staples like flour and sugar.

When a little older, you’d start feeding the calves and later graduate to helping in the dairy barn. By 12 or 13, you’d be doing the milking and caring for the pigs with the other chores handed off to someone younger. But there was no one behind me so at 18 I was still caring for the chickens as new chores were added. In fairness, this didn’t all fall on me. David, a year older, shared in the farmyard work as my older brothers joined in the fieldwork. In the summer, I would help bale hay, walk the bean fields, the usual stuff kids did on a working farm.

Dad was a second-generation farmer but first generation born in the U.S. My paternal grandparents came from Belgium. I think their intent was to stay long enough to make some money and go back. But the Depression came in the 1930s and they never went back, though Grandma did make one visit.

In the winter Dad worked as a cattle buyer for Iowa Beef Processing, and others. He was paid on commission. He would negotiate with farmers on behalf of the packing plants. With the money he made my parents were able to buy each of us a Christmas present. Like many families in that era, I guess we were poor, but as children you didn’t know that. It was amazing what our parents were able to provide us.

My mom is Belgium and Dutch. Her dad died when she was still a toddler. My Grandma Ann (Traen) gave my mom and dad a small herd of Holsteins as a wedding present and that is how they got started as dairy farmers.

My mother was always working. The washing machine never stopped. Without a dryer, clothes were hung outside and in winter on lines in the basement,

In summer, the oven and stove went all day for canning and freezing. And there were four meals a day to prepare, including a 4 o’clock lunch before a late supper.

Both grandmothers came over and helped in the garden while grandpa helped dad farm. My grandmas did a lot of the canning and freezing, so the garden was helping to feed three families.

My first garden memory is Grandpa sitting on a five-gallon pail turned upside down in the springtime, cutting the seed potatoes with his jackknife, making sure every hunk of potato had an eye. Grandpa would dig the hole and I would put in the piece of potato, making sure the eye was up. It was a huge garden. There were green beans, cucumbers for pickles, beets and rows of sweet corn along the fields.

Mom would buy peaches and cherries in town, whatever was in season, and can them. Gunny sacks of potatoes were stored in a neighbor’s root cellar to get us through the winter.

Sunday dinner 52 weeks a year consisted of three fried chickens, mashed potatoes and corn. We’d have oatmeal, or sometimes cream-of-wheat, every morning while school was in session. It was fast and stuck to your ribs. Mom didn’t have time to plan elaborate meals.

Bonnie and Clyde
We all got on the same school bus. The younger kids went to St. Peter’s Catholic School, which went through eighth grade and later sixth grade. We were taught by the School Sisters of Notre Dame, a religious order of nuns from North Mankato. For me, they were a positive influence.

On Sunday mornings and later Saturday evenings, all 12 of us would load up in the powder-blue Pontiac station wagon that we called Bonnie. Thank goodness this was before car-seat laws. Later, Dad bought a second station wagon and, of course, we named it Clyde.

I was the first in the family to lean toward a religious vocation. My parents were both very strong in their faith. When I first told them I was thinking about becoming a priest, Dad wondered if such a sacrifice was worth it. Why would you want to give up having a family? For him, family was so important. However, by the time I was ordained in 1990 he was very proud, and mom was very supportive all the way.

Identical questions years apart pointed me toward the priesthood. When I was in junior high, I was an altar server at Mass. One day as I was leaving, the parish priest asked if I had ever considered becoming a priest. “No, I haven’t!” I replied and ran out of the sacristy. I was really not interested in becoming a priest. But a seed had been planted.

Late in my senior year at Canby High School, a booming voice over the intercom called me to the office of Estel Saum, a sure sign you were in trouble. Estel was the assistant principal, athletic director and designated disciplinarian. Tall and heavyset, he had his arms crossed, as always, and as I entered the office he told me to close the door. I was puzzled but sure I was really in for it.

He said, with a grin on his face: “I realized that in all the years I have had you in the high school I’ve never had to call you into the office, so I wanted to do that before you graduated.” He asked what I was thinking about after graduation. I told him I was going to St. Thomas and thinking about communications, something like that. And then he said: “Have you ever thought about becoming a priest?” Now what was significant to me was that the question was being asked of me again and this time from Mr. Saum, who was not even Catholic. So I asked him, “Why are you asking?”

He carefully pointed out some of the qualities he’d seen in me over the years. So now I had to give it more thought. So I decided I would enroll in the seminary for one year and then I would have the peace of mind that this wasn’t for me. From there, I would be on my way to bigger and, certainly, better things. Well, the God of surprises had a different plan for me. One year led to another and I gradually came to know that this was what I was being called to do. I’ve no regrets. I’ve found the priesthood to be incredibly fulfilling. I have received an abundance of grace and blessings while walking with people on their spiritual journey.

The flower in the rock
In 1995, I had been a priest for five years. With three classmates from college and seminary, we took a guy’s trip to explore Yellowstone National Park off the beaten path. Camping, outside a two-star hotel, is not my want, but we slept in tents, rafted, rock climbed and hiked.

At the end of one day, I recall walking alone near camp between gray rock formations and noticed above me a wildflower growing from a crack. I didn’t know its name, but there was something about that flower that spoke to me. How did the seed get there? A bird, the wind? How was it able to become what it is, and what is sustaining it? All these questions were swirling in my mind. That flower, for me, was a moment in time; kind of like Moses and the burning bush.

At that moment I realized I had spent most of my spiritual life, actually, my life in general, trying to find and have the answers, having the right answers for people, so I could help them. At that moment in this little canyon, I felt a sense of peace that, it’s OK to not have the answers. Like this flower growing out of a rock, there is mystery. To gain the realization that neither my resumé or title matter as much as I once thought it did gave me a new way of encountering life.

Now it’s less about having the answers and more about living the questions. That single flower was a God Moment. But how would I ever explain that to my buddies back at camp? I didn’t.

The flower in the rock awakened in me a passion for gardening and flowers. Now I embrace mystery and the ups and downs of life through planting, pruning and potting flowers. I find it helps when I talk to the plants. I like to give them a name other than the one they come with from the greenhouse. All living things need a name; it helps us develop a deeper relationship with them.

Thrill, fill and spill – Trinity of flower pots
Somewhere I learned, as have others, that every pot of flowers must have a thrill, a fill and a spill to it. The thrill of the pot is the plant/flower that’s a little taller than the rest; it grabs your attention. The fill are those plants/flowers that give the pot their substance and the spill are those plants/flowers that cascade down the outside of the pot.

The second commandment for potting comes from Grandma Verhelst. She always said that when it comes to flowers: “All colors go together.”

I am always looking at the spiritual side of things. So when I talk with people, I want to hear about their common lived experiences. What are their thrills in life, what fills them? We need all three components to experience a holistic life. What fills us, what gives us meaning?  For me, it’s about God’s creation and all its creatures; sunrises and sunsets, asking people if their irises are blooming or if they have ever tried floss dancing?

The “spill” of the pot helps to remind me that we all need to take risks; to venture outside of the container we have put ourselves and others into while at the same time staying connected to our roots. It’s difficult to embrace the “spill” in living because it involves letting go of those things we have no control over or those things we can no longer do.

Thrill, fill, spill; it is the Trinity for living in gardening form.

I find gardening, potting plants/flowers therapeutic. In the springtime I’ve been known to stop out at Stacy’s Nursery and help with potting the flowers. I thank Angela and Lora for putting their trust in me to help out. I tell them it’s cheaper than having to see a therapist. After all, as the good book reminds us: “It all began in the Garden!”
AFCOffice@OurLivingWater.org
Staff Login
Website Development by The Parish Solutions Company